Jewelry: The Art of Human Adornment

We have evidence that humans decorated themselves with jewelry 108,000 years ago. Yes, that is correct: 108,000 years ago. Shell beads were found in the Skhul Caves, Mount Carmel, Israel. Through time, beads were made of every conceivable material: shell, bone, clay, metals, glass, plastic, just to name a few. Beads have not only been used as adornment/jewelry, but also for financial transactions (e.g. cowrie shells: BlackPast.org's logo), ritualistic importance, religious and ceremonial purposes, and expressions of social rank. Lois Sherr Dubin, historian, has written extensively on the fascinating history of beads. Her book, The History of Beads: From 100,000 B.C to the Present, Revised and Expanded, is a lively overview of human adornment and artistry through place and time with beautiful photographs. The next documented finding of beads/jewelry is dated at 75,000 years ago from Blombos Caves, South Africa. Perforated ostrich shells dated to 40,000 years ago have been found in Kenya. The history and meaning of jewelry/beads in Africa has been widely researched and written about.

Bead and jewelry making became specialized arts and crafts, much like all other activities. The more people learned about and explored metallurgy, glass making, gem finding and cutting, the more varied and sophisticated became the designs and construction of jewelry, whether made in Africa, the Middle East, Europe, Asia, or the Americas. People traded, beads, knowledge, and skills along all the major trade routes. African Americans have been in the jewelry business and in the forefront of avant garde design. An example of the former is the venerable firm, Waller & Company Jewelers, founded in 1900. Art Smith designed jewelry for black artists, starting in the 1940's, including Duke Ellington and Tally Beatty. He also designed a brooch for Eleanor Roosevelt. 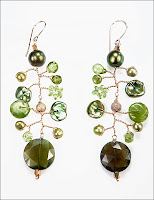 And now, jewelry takes on a role in BlackPast.org! Northwest jewelry artist, Susan Goodwin has generously agreed to donate some of the proceeds of her trunk show on June 30 to help fund the website upgrade of BlackPast.org.  Those individuals in Seattle are invited to attend the event from noon to 5pm. For details on the event, 'like' Susan Goodwin Jewelry on Facebook.