This week, the North American International Auto Show opens in Detroit, Michigan. While Detroit has been synonymous with the auto industry, both in its hey day and in its decline, there was another city where automobiles were designed and manufactured by, so far, the only African American family in that business. Today, there are black engineers and designers involved in the auto industry. In fact, the latest breakthrough in transportation technology is an African American PhD candidate at MIT: William Lark, Jr. is chief designer of a "small stackable car that folds".

Greenfield, Ohio was home to the C.R Patterson Car Company. Born into slavery in 1833, Charles R. Patterson arrived in Greenfield, Ohio in 1862 where his skills as a blacksmith and wagon repairman were much in demand.

Sometime around 1888, Charles Patterson went into partnership with J.P. Lowe & Co, a carriage maker and eventually bought the business in 1893. The development of an automobile began in 1914 and the first one was completed in 1915. 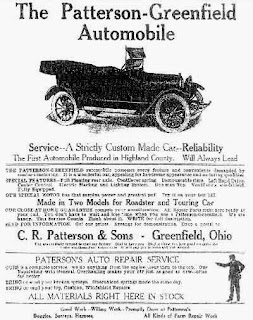 The company went on to manufacture trucks and eventually specialized in school buses, becoming known as the Greenfield Bus Co. Frederick Patterson, Charles Patterson's son, died in 1932, having run the business after his father's death. Frederick's sons worked in the business until its doors were closed, shortly after Frederick's death.