The summer of 2014 marks the one hundredth anniversary of the start of World War I. Armchair travel, virtual travel, and physical travel are each a means to learning about and understanding the resonance WWI still has for us today.

While the USA did not enter the war until 1917, a good place to start your armchair  journey of understanding can be found in a newly released book, The Sleepwalkers, How Europe Went to War in 1914 by Christopher Clark (your purchase of this book through Amazon Smile will benefit BlackPast.org: just click here). There are also some excellent works of fiction that will provide an emotional context to your learning experience as well as offering reliable information, including Pat Barker's trilogy Regeneration, The Eye in the Door, and Ghost Road. Other voices and opinions can be explored here.

President Wilson had tried to steer the USA on a course of neutrality, refusing to send troops and other forms of assistance to Europe. A variety of events and decisions caused him to take positive action to support the alliance of Britain and European nations against Germany. As a nation made up largely of immigrants from different ethnic, religious, and geographic backgrounds, America found itself in a very awkward position. There were pacifists and objectors who continued to advocate for non-involvement. In terms of geographic breakdown in the US, the North generally opposed the war and the South supported it. The African American community, most of whom lived in the South, were neutral. However, the country eventually rallied. A month after Congress declared war, W.E.B.DuBois urged African Americans to "fight shoulder to shoulder with the world to gain a world where war shall be no more".**  The draft began and black men were called up: this became the game-changer in the lives of African Americans that continues to reverberate today. As blacks fought and died for their country and for the larger cause of peace and democratic principles, they began to demand the equal treatment at home that they found abroad. On the home front, the Harlem Renaissance was in full swing (on the main page of  BlackPast.org, search for 'Harlem Renaissance' for detailed listings of history, art, culture, and politics) as well as the Great Migration; this contributed to intensifying the knowledge that not only was change possible, but that it was imminent.

This same phenomenon was evidenced during and after World War II. It took going abroad to galvanize the black troops into realizing that not only was change at home necessary and possible, but that they now had a moral force behind them: their contribution to the war effort on behalf of their country.  For more information and interesting links check here. Also, if you search 'WWI' on BlackPast.org, you will find four pages of links to information about African Americans and WWI. If you click under the 'image' tab on that same search page, there are many photographs of interest. 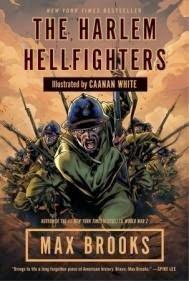 Because America's involvement in World War I was less protracted than Europe's, much less literature and poetry was generated. One group of soldiers were the inspiration for both non-fiction and fiction and that was the 369th Infantry Regiment, also known as the Harlem Hellfighters. A new graphic novel, The Harlem Hellfighters by Max Brooks and illustrated by Caanan White, was published this year.

If you are now ready for a virtual WWI experience, there are many documentaries and film clips at the Smithsonian, Library of Congress and, of course, YouTube and the History Channel.

To make an actual excursion to visit the sites where these brave men fought and many died, one of the best places to start is the Imperial War Museum in London. There you will get a full overview of the War, walk through a trench, view art that expresses the horrors, sorrows, and few joys of that war. If you prefer to travel within the US, the National World War I Museum in Kansas City offers similar experiences, including information on African American soldiers. There are many organized tours of battlefields. But once you have done the reading, watched the videos, been to a museum of two, buy some travel guides and map your own tour based the documented experiences of African American soldiers such John Henry "Doc" Hamilton of the 92nd Infantry Division and the 93rd Infantry Division (which included the Harlem Hellfighters).

**Panayi, Panakos,"Minorities in Wartime: National and Racial Groupings in Europe, North America, and Australia During the Two World Wars" (1992) p.170.
Posted by Hazel at 8:17 PM 2 comments: Links to this post

Remembering Maya Angelou: An Occasion for Reflecting on the Importance of Poets

Maya Angelou spoke words, wrote words, sang words, danced words, taught words. Everything she did underscored the importance of words: words to express anger, joy, sorrow. Words to connect people to their history, their past and their present. Words of wisdom to young women; words of caution to an uncaring public; words to live by to two Presidents of the United States of America. A list of her poems can be found here.

The importance of Maya Angelou, the poet, reminds us of the importance of poetry as an art form and a political form in the Black community. The first known Black poet in America was Lucy Terry Prince, born in 1732.There is a list of 46 poets at this link: take some time to explore how the words of these thought leaders shaped views, values, and conversations. An article in The New York Times May 27, 2014 reports on The Dark Room Collective. Formed in the late 1980s, building on the legacy of "the Beats Generation, the New York School, the Fugitives, the Black Arts Movement, even the Harlem Renaissance", this group of dynamic young poets and artists realized the need and the importance of shared criticism, mentoring, and growth that can only be found in a group, not in isolation.

Maya Angelou was unique among artists: she excelled in a variety of media and was active in social and political change. She lived on the world's stage. She spoke truth to power. She showed no fear or fear of criticism. She appeared to not care what anyone thought of her manner of living. She was a lesson in a life lived well.
Posted by Hazel at 6:47 PM 1 comment: Links to this post