Art is political whether purposefully or inadvertently. Art can be manipulated, can make a statement through what is created or the mere creating of it. It is possible to enjoy and appreciate art regardless of its intent; it is possible to fulminate against the message no matter how beautiful the object. But art, its creation, display, ownership reflects and projects power. 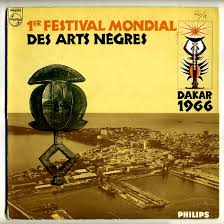 The independence of Senegal in 1960 and the election of Léopold Sédar Senghor as president was the beginning of Dakar becoming both the center and the jumping off point for promoting and celebrating art from Africa. While studying in France, beginning in the 1930's, Senghor was one of the leaders of the Negritude Movement, a movement of black Francophone writers and intellectuals who used language (French) to explore their cultural heritage. Upon his return to Senegal, Senghor was determined to see artists and countries in Africa on the world art stage, engaging with European artists with excitement and equity. He established Dakar's École des Beaux-Art (School of Fine Art) in 1960, hosted the World Festival of Negro Arts in 1966, all of which culminated founding of the prestigious DakArt Biennale in 1992 and exhibiting in Harlem, USA in 2000.

The African art explosion and influence continues  and is manifested at such events as the fourth annual 1:54 (this name comes from 1 fair, 54 countries) in London (October 2016) and New York (May 2016). One hundred thirty contemporary artists are represented. 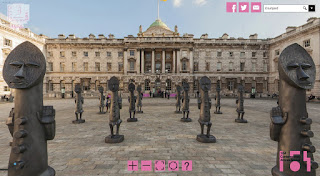 Check out the virtual tour, right, of the exhibition space in London and be sure to tour the website of 1:54 for some great eye-candy and thought-provoking art work!

The arts and artists cannot exist without support, whether from the public or from private collectors. Collecting, too, becomes a political act: if no one appreciates and values the works of any particular group of artists, by genre, geography, ethnicity, then those artists, their message, and their works languish. Here is one list of the top 200 collectors in America of Black art. One of the most powerful proponents and collectors of art of the African Diaspora and Africa is Pamela Joyner. Reading the link about Joyner (left), the most striking impression one gets is her intentionality about what it takes to collect and support art: knowledge, passion, money. And, as the first President of Senegal, Léopold Sédar Senghor, knew, unless patrons of the arts support arts in the schools, artists in their studios, exhibitions for artists to show their work, advocate with museums and donors to purchase art, artists who do not have political power/support cannot compete on the world stage, no matter how talented they are.
Addendum: check out this great opinion piece here about the need for museums in all countries in Africa.