Giving Thanks for Much Good News

The season of giving thanks is a great opportunity learn about the work of those whose hard work, imagination, being organized, and higher order thinking skills have created paths that are interesting to follow.

The newest batch of Rhodes Scholars, 32 from the United States, include the largest number of African American scholars chosen in one year: ten. These scholars represent a large swath of the country. Currently, the most well known of these is Cadet Simone Askew of Fairfax Co, Virginia, the first black woman to serve as Captain of the 4,400 member Corps of Cadets at the U.S. Military Academy: the highest position in the cadet chain-of-command at West Point.

These executives, clockwise from left, Robyn and Tony Coles, Charles and Karen Phillips, and Marva Smalls, have formed a PAC (a political action committee) to work on issues they had been informally working on: education, employment, and voting rights.  Be sure to peruse all the above links: these executives, and others mentioned in the NYT article, realized that just donating money to good causes was not going to be sufficient, they were going to have to organize, lobby, and exert political influence.

Three (of many!) works of non-fiction are worth reading. They are: The Man Who Stole Himself: The Slave Odyssey of Hans Jonathan by Gisli Palsson. The subject of this very interesting story lived from1784 to 1827 and his story takes place in various parts of Scandinavia. The Color of Money, Black Banks and the Racial Wealth Gap by Mehrsa Baradan and The Color of Law by Richard Rothstein both explore and explain the historical underpinnings of what is so observable today: the effects of red-lining, the effects of circumscribing economic growth, the long-term effects of racial exclusion.


This year, 2017, Jesmyn Ward won her second National Book Award for her new novel Sing, Unburied, Sing. Her first book for which she won the National Book Award, Salvage the Bones (2011) explores Hurricane Katrina. Ward is a recipient of the MacArthur Fellow or "Genius Award" and associate professor of Literature at Tulane University. 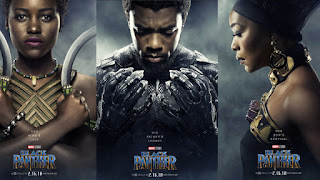 Marvel Comics has a series, Black Panther, which has been made into a movie.  According to journalist Michael Harriot of The Root, the release of the movie posters is causing heart palpitations amongst nerds in the black community! Better check them out!


In the art world, international art fairs are big business, status symbols, and venues to showcase up-and-coming artists as well as those with established careers. Art X Lagos recently opened its second edition to great applause and accolades. An interview conducted by The Guardian with the Art X Lagos director, Nigerian Tokini Peterside, examines just how far, and fast, this art fair has come.
Posted by Hazel at 8:16 PM